To be shoehorned into a motorcycle frame 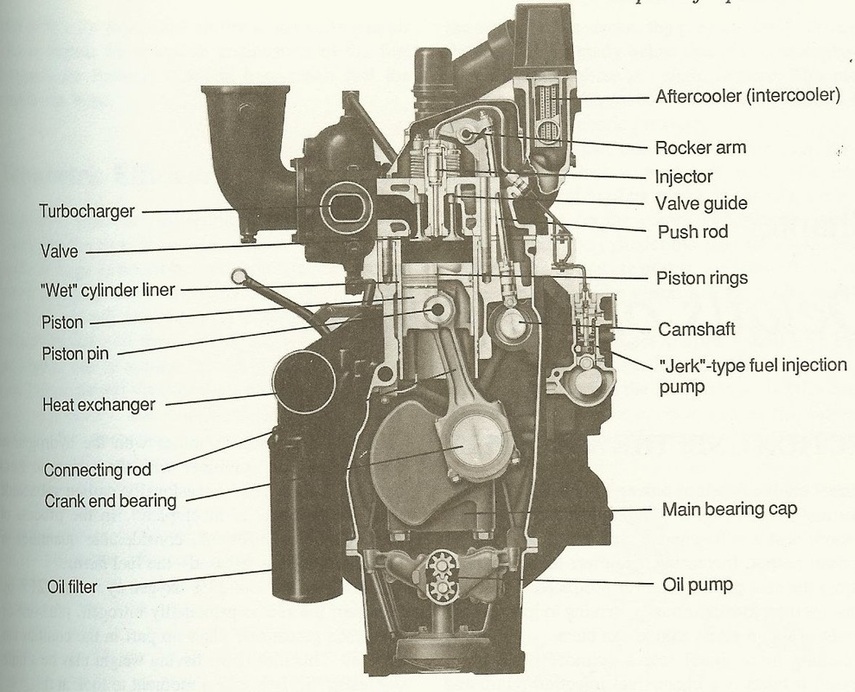 Fuel economy
The MAN S80ME-C7 low speed diesel engines use 155 grams (5.5 oz) of fuel per kWh for an overall energy conversion efficiency of 54.4%, which is the highest conversion of fuel into power by any single-cycle internal or external combustion engine (The efficiency of a combined cycle gas turbine system can exceed 60%.  Diesel engines are more efficient than gasoline (petrol) engines of the same power rating, resulting in lower fuel consumption. A common margin is 40% more miles per gallon for an efficient turbodiesel. For example, the current model Škoda Octavia, using Volkswagen Group engines, has a combined Euro rating of 6.2 L/100 km (46 mpg-imp; 38 mpg-US) for the 102 bhp (76 kW) petrol engine and 4.4 L/100 km (64 mpg-imp; 53 mpg-US) for the 105 bhp (78 kW) diesel engine.

However, such a comparison does not take into account that diesel fuel is denser and contains about 15% more energy by volume. Although the calorific value of the fuel is slightly lower at 45.3 MJ/kg (megajoules per kilogram) than petrol at 45.8 MJ/kg, liquid diesel fuel is significantly denser than liquid petrol. This is significant because volume of fuel, in addition to mass, is an important consideration in mobile applications. No vehicle has an unlimited volume available for fuel storage.

Adjusting the numbers to account for the energy density of diesel fuel, the overall energy efficiency is still about 20% greater for the diesel version.

While a higher compression ratio is helpful in raising efficiency, diesel engines are much more efficient than gasoline (petrol) engines when at low power and at engine idle. Unlike the petrol engine, diesels lack a butterfly valve (throttle) in the inlet system, which closes at idle. This creates parasitic loss and destruction of availability of the incoming air, reducing the efficiency of petrol engines at idle. In many applications, such as marine, agriculture, and railways, diesels are left idling and unattended for many hours, sometimes even days. These advantages are especially attractive in locomotives.

Even though diesel engines have a theoretical fuel efficiency of 75%, in practice it is lower. Engines in large diesel trucks, buses, and newer diesel cars can achieve peak efficiency around 45%, and could reach 55% efficiency in the near future. However, average efficiency over a driving cycle is lower than peak efficiency. For example, it might be 37% for an engine with a peak efficiency of 44%.

Torque
For commercial uses requiring towing, load carrying and other tractive tasks, diesel engines tend to have better torque characteristics than petrol engines. Diesel engines tend to have their torque peak quite low in their speed range (usually between 1600 and 2000 rpm for a small-capacity unit, lower for a larger engine used in a truck). This provides smoother control over heavy loads when starting from rest, and, crucially, allows the diesel engine to be given higher loads at lower speeds than a petrol engine, making them much more economical for these applications. This characteristic is not so desirable in private cars, so most modern diesels used in such vehicles use electronic control, variable geometry turbochargers and shorter piston strokes to achieve a wider spread of torque over the engine's speed range, typically peaking at around 2500–3000 rpm.

While diesel engines tend to have more torque at lower engine speeds than petrol engines, diesel engines tend to have a narrower power band than petrol engines. Naturally aspirated diesels tend to lack power and torque at the top of their speed range. This narrow band is a reason why a vehicle such as a truck may have a gearbox with as many as 18 or more gears, to allow the engine's power to be used effectively at all speeds. Turbochargers tend to improve power and torque at high engine speeds; superchargers improve power at lower speeds; and variable geometry turbochargers improve the engine's performance equally by flattening the torque curve. The Paxman Hi-Dyne engine was a 1950s attempt to widen the power band of a diesel engine.

Power
In diesel engines, conditions in the engine differ from the spark-ignition engine, since power is directly controlled by the fuel supply, rather than by controlling the air supply.

The average diesel engine has a poorer power-to-weight ratio than the petrol engine. This is because the diesel must operate at lower engine speeds and because it needs heavier, stronger parts to resist the operating pressure caused by the high compression ratio of the engine and the large amounts of torque generated to the crankshaft. In addition, diesels are often built with stronger parts to give them longer lives and better reliability, important considerations in industrial applications.

Diesel engines usually have longer stroke lengths chiefly to facilitate achieving the necessary compression ratios, but also to reduce the optimal operating speed (rpm). As a result piston and connecting rods are heavier and more force must be transmitted through the connecting rods and crankshaft to change the momentum of the piston. This is another reason that a diesel engine must be stronger for the same power output as a petrol engine.

Yet it is this characteristic that has allowed some enthusiasts to acquire significant power increases with turbocharged engines by making fairly simple and inexpensive modifications. A petrol engine of similar size cannot put out a comparable power increase without extensive alterations because the stock components cannot withstand the higher stresses placed upon them. Since a diesel engine is already built to withstand higher levels of stress, it makes an ideal candidate for performance tuning at little expense. However, it should be said that any modification that raises the amount of fuel and air put through a diesel engine will increase its operating temperature, which will reduce its life and increase service requirements. These are issues with newer, lighter, high-performance diesel engines which are not "overbuilt" to the degree of older engines and they are being pushed to provide greater power in smaller engines.