Stasis Theory According to Purdue

https://owl.english.purdue.edu/owl/resource/736/01/
This link also includes the questions used in stasis theory, which I have answered below.

My Answers to Stasis Theory

The development of renewable sources of second generation biofuels has led to the vast expansion of biodiesel at the turn of the 21st century. Limitations in production of first generation biofuels caused biodiesel usage to be suppressed during the 20th century, as well as the ready availability of petroleum fuels. However, as second generation biofuels are produced from feed-stocks as opposed to the food-stocks of the first generation, removing the limitations on commercial production of biodiesel, and allowing its increase in popularity worldwide.
Biodiesel is a renewable fuel usable in diesel engines formed through the process of transesterfication, in which triglycerides are combined with methanol or ethanol in the presence of a hydroxide catalyst such as potassium hydroxide. This chemical process splits the triglyceride into esters and glycerol, and the esters are used as biodiesel.
There are a few issues with biodiesel, some with the fuel emissions themselves, and some with the larger production impacts. The main cons to the specific use of biodiesel in diesel engines are the resulting increase in NOx emissions, as well as the corrosion of the engine which will lead to seizure in engines pre-1992 (due to the use of natural rubbers which are especially corroded by biodiesel.
Biodiesel was first created and discovered by Rudolf Diesel by the beginning of the 20th century, where he ran a diesel engine on peanut oil at the World Exhibition in Paris in 1900. This led to an expansive development into the process of transesterfication, culminating in the development of modern biodiesel. This allowed many diesel trucks and other equipment to convert to the renewable fuel, decreasing their emissions and ecological impact.
As the U.S. wages war throughout the middle east for the past 30 years, our dependance of foreign oil has fueled our motives and reasons. This foreign oil will dry up, so will the U.S. reserves, and this decline in the availability in petroleum has caused humanity to rapidly start looking for alternative fuel sources to allow us to continue consuming energy as a society as a whole. In addition, the impending doom of climate change and global warming has also pressured humanity to find a renewable and ecological and clean burning fuel cells before we suffocate ourselves to extinction
The world petroleum supply would be drained at an exponential rate, as it is already. This would either force humanity to develop more renewable energy sources, or face our own inevitable destruction. These renewable energy sources must be clean burning, ecological, economical, and readily available, making second and third generation biodiesel a prime choice to allow us to ease our addiction to petroleum


It may also be useful to ask critical questions of your own research and conclusions:
.
I obtained my historical data of biodiesel from wikipedia, and corroborated this information with data from Biodiesel.org as well as
http://auto.howstuffworks.com/fuel-efficiency/alternative-fuels/biodiesel4.htm, a reliable encyclopedia-like online source which details the history of biodiesel as well as the pros and cons of the emissions of biodiesel vs conventional diesel.
"How stuff works" is a "Discovery" channel website, which is a very well respected source. Biodiesel.org is a website published by the National Biodiesel Board, which is a foundation base upon supporting the usage and available information on biodiesel. This assumes a prejudicial source of Biodiesel.org, however, the information found on this site is corroborated by many of my other sources, most of which are not prejudicial. In addition, I have verified many of the sources on the biodiesel page of wikipedia, corroborating my trust in the wikipedia article.

The nature of the biofuels issue is the U.S. and world dependence on traditional petroleum, and how we can ecologically continue our frivolous lifestyles. The problem stems from a 20th century addiction to oil, which was caused by the invention of the internal combustion engine, an evolution from the coal reliant steam engine. This caused global consumption of oil to skyrocket since the turn of the 20th century, displayed in the graph below compared to 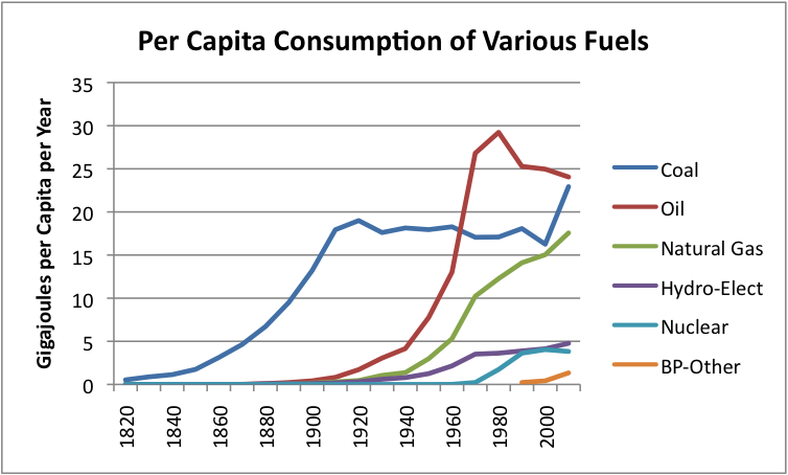 http://gailtheactuary.files.wordpress.com/2012/03/per-capita-consumption-of-various-fuels_line.png
The main issue inside our search for an ecologically friendly fuel cell is the social agreement to use the newest fuel cell technology available, as opposed to falling back into our old oil habits. This social agreement to use more ecologically friendly fuel sources will not be possible until the environmental impact of our destructive, polluting, smog forming, gasoline using habits are staring the public in the face.
This problem is a global pandemic, even as I write this, smog in Taiwan thickens making it unlivable, greenhouse gasses (which are less prominent in biodiesel emissions) flood out of our smokestacks and tailpipes and trap the heat within our atmosphere. Until civilization realizes its self-destructive actions, this will be a world-wide problem.
The fuel cell issue belongs to the overarching global warming threat made popular by Al Gore's campaign against greenhouse gasses. His publicity allowed the world to become aware of the thickening atmosphere, long with the hole in the ozone layer, allowing deadly solar flares to start blasting our rich atmosphere off the Earth.
The global warming crisis can be related to millions of different impacts and causes around the world, as it is a global issue. However, to focus more within the scopes of reasoning behind my project, I will focus more upon transportation fuel sources to aid in our battle against pollution, along with how these fuel sources can be used to power fuel cells and allow humanity to travel freely without creating deadly greenhouse gasses.

The U.S. government plays a huge role in the energy industry, including regulating the gasoline, diesel, electrical, natural gas, and renewable energy stores. In addition, international policies have been shown to manipulate fuel prices, namely war and treaties in oil rich areas such as the Middle East, Canada, and Russia.
The effect the U.S. government plays upon the global energy crisis is extremely unconstitutional due to the massive influx of money to politicians by the lobbyists of the aforementioned industries. This causes the U.S. government to not act in the best interests of the people of the United States, but instead in the interests of massive petroleum conglomerates. In addition, the foreign policies of the oil rich countries named earlier have been known to bend governments to their will by threatening their oil supplies.
Quality

The growing production of biodiesel is a very good step towards ecological and economical stability, as the clean burning fuel will be readily available to most countries capable of growing their own feedstocks. This can aid in the larger battle against climate change, and allow the U.S. in particular to survive its addiction to foreign oil.
As outlined previously, the overarching issue in which biodiesel is not a cure, but a tool, is climate change. Climate change is a global issue, threatening our entire species with extinction, and must be handled soon.
The issue of climate change will affect the whole world, as its results will determine our fate as a species. However, some nations stand to oppose breaking our dependence on petroleum, as their profits from their massive oil reserves have brought billions of dollars to their once poor countries.
If we continue to "shit where we eat", the world will slowly suffocate, destroying our society and killing our species, as the world crumbles around us. the other possibility is the drying up of oil reserves, leading to anarchy over fuels, similarly to the gas crisis of 1979. However, that crisis was caused by a 4%  decline in oil production, from which rioting and panic buying ensued. If this is the effect of a 4% decline in oil production world wide, imagine what anarchy would ensue from a 100% decline in oil production. This is unacceptable, as a humans basic instinct is to survive, just like any other animal, and our society should prioritize ecologically friendly developments.
The cost of becoming an ecologically friendly society is a change in mindset in every person on the planet to conserve and contribute positively to the environment. In addition, we must sacrifice time, effort, and money to research and invent new and progressive ways to power our vehicles and homes.

The scientific community has determined the severity of global warming, of which the magnitude is still highly debated. However, the presence of climate change has been repetitively proven by teams around the world, and is an established theory.
The scientific community influences our interpretation of the severity of climate change and global warming in an effort to explain and make the public aware of our impending doom. This is not a biased opinion as the scientific method supports the continuous updating and correcting of theories and hypotheses.

Action must be taken, and specifically to my topic, biodiesel must be implemented soon, otherwise the world will either starve to death for oil or oxygen. Either way, humanities dependance on oil must be countered, lest our downfall be the result of our own ignorance and stubbornness against change.
The entire world must be involved in countering climate change, as any less would continue to pollute the earth, still causing harm to the environment. Major players will involve governments and monetary leader, as they must be able to lead the world into a green era.
The first step in countering climate change, is reducing our dependency on petroleum oil. Of that first step, the first part of it is to expand our biodiesel industries, giving us more time and fuel to supplement our draining oil supply, and allowing us the much needed time and energy to continue researching and developing better fuel technology. Once this ecological and economical fuel cell technology is developed, we must work to repair our damages by supporting plant growth, hopefully making up for our rape of nature in our effort to build "civilization".
To full address and solve climate change, humanity must work as a whole towards our goal, almost in a hive mentality. This is our main challenge, and the ideal situation of uniting the world under this growing dilemma may perhaps be a pipe dream.

I have developed my own determination of what to do about climate change, however, I am sure that my opinions and beliefs are supported by others, as they have been based upon my research into biodiesel and climate change. The solution I propose to counter climate change is vague to say the least, as it is only supposition, however, I wholeheartedly believe that  these steps will only lead to progress in our struggle against global warming and pollution.